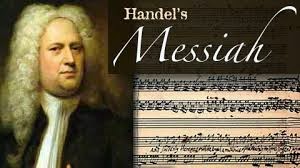 The choir, led by the great Trevor Pinnock, who also played harpsichord, richly resonated the power of the music as Les Violons du Roy revealed their ensemble excellence that has brought them world-wide acclaim since their debut performance in 1995.

The stamina needed to endure the rigorous length, complex passages and collective vocal and instrumental timing was key to the success of the production.  All the artists never wavered in commitment while delivering the epic oratorio with seamless ease.
Soprano Miriam McHardy has a voice to rival heaven’s arch angels. Each high note seemed to float off the top of her head, and despite the fact that her arm was in a sling, she continued to smile while being fully engaged in every moment whether seated or singing. Her upper register is a masterful feat of beauty; never once was there a hint of strain. Her pitch-perfect performance - regardless of several challenging passages, transported us into rapture. She had many peak moments that stirred our emotions.

Mezzo-soprano, Allyson McHardy possesses a fine range and her empathy for the lyric was most obvious. This was poignantly illustrated in the solo, “He was despised”. Somber and austere in approach, Ms. McHardy also was able to covey a range of textural color and joy, as heard in the 8th segment -  the Air, “O  thou that tell good tidings to Zion.” The choir vitally enriched it all with emotional vigor and uplifting sonorous harmonies.

Tenor, Allan Clayton possesses a rich tone and sensitivity with sweetness.
In contrast was the dramatic passion and ebullience expressed with bass-baritone, Andrew Foster Williams. He was a stand-out.  He moved us when he unleashed,” “Why do the nations so furiously rage together?”

This concert was inspiring, omnipotent and wholly memorable. It was as if the Savior himself was present, radiating his godliness and eternal munificence on us mere mortals.